With over 15 years of sales, project management and business development experience gained in the U.S and Canada, Benoit joined GTR Turf in 2006 as a founding member of GTR Turf USA.

Following successful years of growth in this region, Benoit became the vice president of operations and  now oversees all of GTR’s Key activities in the United States.

GET A FREE QUOTE 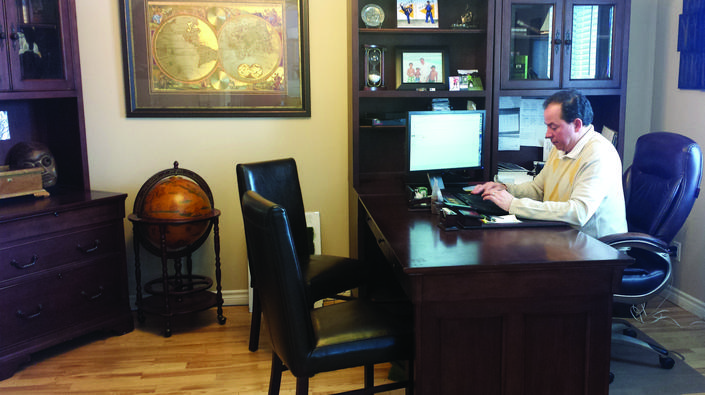 2001, while installing a field in Léon, Guanajuato, Mexico, Luc fell in love for the second time. This time, a women won his heart. One year later, they got married.

“I met my wife thanks to synthetic grass. Life gave me the greatest gift of all” says Luc Rochon. Today, Luc has been married for 13 years and has 3 beautiful boys. Above all, Luc is a family man.

Luc is constantly facing major challenges. He achieved an amazing feat by installing 1 million square feet of synthetic grass in one month. During this period, six soccer and football fields were installed in Fairfax County, of which one was a US football field installed in 3 days with the help of 35 installers.

In 2011, GTR Turf took a substantial step by entering the US market. As a general contractor, Luc provides turn-key solutions to clients; GTR Turf builds the base and installs synthetic grass.

The GTR Turf & Shaw Sports Turf alliance allowed the company to achieve explosive growth by doubling its sales figure every year. Some high profile projects were completed for the 2015 FIFA Women’s World Cup, the Pan-American Games, CFL, MLS and for prestigious educational institutions such as National Cathedral School, Collège Français and Académie Ste-Thérèse.

Luc has a very precise vision for the future of his company. He wants to consolidate the Canadian market, open an office on the US West Coast and another one in Mexico. He hopes to continue offering its customers innovative and high-quality products while being ecological.

The man behind GTR Turf

Luc Rochon, native of Saint-Jérôme, is a born entrepreneur. Coming from a family of entrepreneurs, Luc started in the business sector at the age of 16. He was 25 when he purchased his first business.

Luc started in the synthetic grass sector as an installer for the Field Turf company.

In 1998, he participated in the FIFA World Cup in France. This experience gave him “the bug” of the synthetic grass industry.

He then worked with the two founders of Field Turf, Mr. John Gilman and Mr. Jean Prévost. As Mr. Gilman’s assistant for many years, he was one of the pioneers to use rubber granules as a filler material for synthetic grass fields.

Jacques started his career at the age of seventeen in the Royal Canadian Navy. He travelled from Halifax to Victoria and ended up in the headquarters situated in Quebec where he was assigned to change and improve intern rules and laws. He appreciated his stay in the Navy and left with Honor at the age of thirty full of wonderful experience and a lot of discipline. When he left he was excited to find new challenges and Air Canada was offering him the chance to start a new career.

Being in the Canadian armed forces for 13 years, remaining a sea master wasn’t on the cards for Jacques Zara. So he made his way to Air Canada as a Lead Station Attendant. Meanwhile, he remained in the Canadian armed forces in the naval reserve.   Fifteen years at Air Canada gave Jacques the opportunity to develop outstanding business skills and expand his network of contacts. One of them, an individual  named Luc Rochon, turned out to be a fanatic and  passionate synthetic turf pioneer.

In 1998, Jacques met Luc through some friends. Luc invited Jacques to come and work part time with him and help to install synthetic sports turf fields. This was a new adventure for Jacques and his learning curve was huge.   However, using the leadership, discipline, business acumen and skills accumulated in his past experiences,

Jacques learned to install the field lines, to sew the turf panels and quickly mastered the art of creating an artificial grass sports field. His first installation was in Chicago, that same year.  Jacques' love for synthetic turf hit the maximum level when he was given the opportunity to be in charge of the installation of the Greenbay Packers synthetic turf training facility. He later installed numerous prestige sports fields for the NFL, CFL, MLS, MLB and FIFA. On October 25th, 2006, Frank Clair Stadium received the first FIFA 2-star recommendation in the CONCACAF; A field built by Jacques.

In 2010, the challenges overcome during his involvement creating synthetic sports fields brought him to the next level. He became an associate at GTR Turf and started a new era for the company. He supported his old friend Luc Rochon in selling artificial turf, not merely installing it for a manufacturer.

During his first year, Jacques closed deals on 12 fields. The following year, he increased to 22 fields across the breadth of Canada.  Jacques has been involved in most of his company's installations. He believes that the upper management and business owners need to get involved in all aspects of the operational projects, to ensure the quality of the installation.  When asked about his top 3 installations, Jacques is unable to answer.

Benoit is also responsible for driving sales and expanding channels to accelerate GTR Turf's regional growth, capitalizing on the rising demand for synthetic turf sports fields that enable organizations to have the best sports facilities.

He created a culture of success, putting in place, infrastructures and systems to support the various installation teams, capable to manage customer expectations and contribute to a high level of client satisfaction.

Benoit is a grey eminence in the synthetic turf industry.

He is always in front of the client, managing the key relationships and actively participates in all the project processes;  from the needs assessment to the construction of the base, to the installation of the field and never closes a project until the client is 100% satisfied

Benoit has an extensive construction expertise that brings value to every client. Being in the synthetic turf industry for over a decade,

Benoit is clearly an important key resource in every project.

For him, every project is a top priority, every project is top of his list. In the future, Jacques wants to manage a North American sales team and offer  turnkey solutions for the market to include the excavation and  installation of synthetic sports fields worldwide. Jacques Zara’s  key to success is to be humble, and to always remain besides the client and support him/her from the beginning to the end of a project.